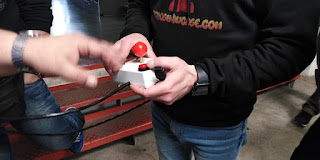 Newsflash for the retro-scene as at the most recent AmiCamp event that was hosted at the Found.ation building in Athens, a number of Alpha prototype joysticks were exhibited to our visitors at the event's second day, on Sunday 31 of March. The new joystick was tested and the participants found it a very interesting retro gadget. Apart from the Sensible Days 3 cup we had as our main event, we also made 2 more software and hardware presentations.

For the time being we can't give any further info regarding the 1st project, as a new Commodore Amiga game is under development. Nevertheless, we can talk about the new joystick.

For the past few months, our personal friend and founding member of the Vintage Computers Society Club Athens (VCS Athens) Kostas Hatzivasiliou (aka ''Dinohatzi" to the Greek retro community) started a new project and a ''personal'' goal!  If someone doesn't know how difficult it is to manufacture such an arcade-level and arcade-quality device, I can assure you it's not a walk in the park at all! 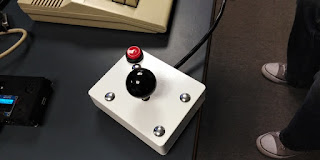 Kostas set a personal goal to build a new 9-pin joystick that includes all those unique characteristics that made the classic Tomahawk joystick from Anerousis one of the best ever joysticks of the Greek market back in the 90s. Tomahawk was the King of arcade-style home joysticks, 30 years ago!
If you think that an actual, metallic arcade-style joystick is easy to be found in 2019 at a reasonable price, you are wrong. Surely someone you has the demanded knowledge can make one, but the cost would be too high to reach a Tomahawk's great standards and quality!
Using a lot of reverse engineering, making searches on the internet and finding quality parts for the joystick's construction, Kostas visited the 7th AmiCamp event with 6 complete Alpha- prototype Joysticks to test them on actual Amiga computers and see the outcome.
All joysticks were tested and the participants and the visitors were very positive towards the new joysticks.
Panos and Nick from Retroshowcase.com were present too, to test the new joystick.
During the AmiCamp event, apart from the Alpha-prototypes) there was a joystick with green colored buttons (actually this is the 1st completed joystick from Kostas).
There were also some 2-button versions available to show that the 2nd button was acting as it was meant to, in 2-button Amiga games. We know that in the next few weeks some prototypes will be sent to the Amiga community for further tests.
The 1st Beta joysticks are already sent to Vaggi6128 and Paranoicb (members of the VCS Athens) and we will soon have updated info and news from the whole development. 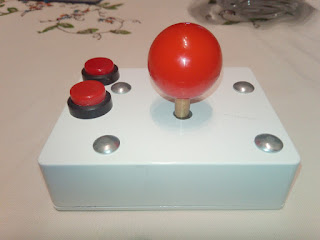 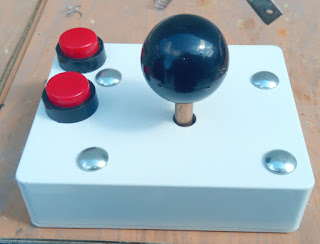