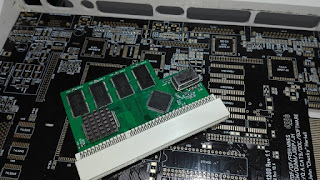 News from the Amiga Scene and especially from Archi-Tech store. This time we were informed about a new stunning A1200 accelerator with reasonable price. Just what we were looking for to
play our beloved WHDLOAD games. For the specs let me tell you that this accelerator is faster than an 68030 at 25mhz.  Its equipped with an 68EC020 clocked at 38mhz with 8mb fast ram.
Bear in mind this is a very 1st version of the card and specs and speed might change in the future.
Bellow we have a sysinfo screen showing the perfomance of the Turbo Card EC1220 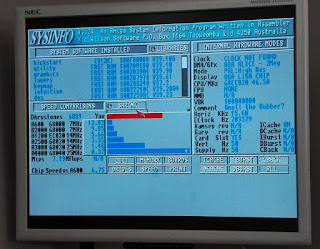 Also the developers have also uploaded a video on youtube to show the perfomance of the turbo card
and they also play some doom to test the card.

In the future we will see more cards pop like blueberries but this one will hit the market fast.
Why ? Because mostly Amiga users who fired up their rig to play some games they only want the most wanted specs to play them. You dont need a fortune to buy a turbo card.
The future is Here.
more info soon