It's was 1st of April when Dony wrote on his blog about the new arcade controller, a project started by Kostas Hatzivasiliou (dinohatzi). It was actually April Fool's Day, so many might have thought that whole thing was "fake" or an Amiga-style joke like "vaporware". But no, it was not! And those who know Dony very well, they can assure you that he already stopped telling April Fool's Day jokes since he was still on the elementary school.

But let's go back to dinohatzi's joystick for which Dony revealed he was among the lucky "beta testers" of -what else- the beta version of this joystick. Now, having the creator's permission, We can write down our first impressions and some technical details. So let's get straight to the point, shall we? 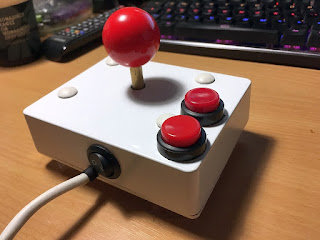 Isn't she a beauty ?

First of all, we have been informed that a possible name for this controller may be "The Greek Stick" or more briefly "TGS". We don't know if this name will be finally adopted, but we personally find it cool and, anyway, we have to somehow give a name to this controller for our post. So, "TGS" it is! 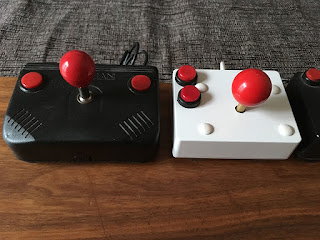 With the legendary Pacman ... 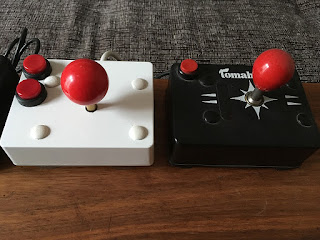 ... and also the legendary Tomahawk.


As you can see at the pictures, the TGS is similar in size to the classic Tomahawk while it is noticeably smaller than the all-times favorite Pac-man. We have the 2-buttons TGS version which also includes an autofire switch -a detail that will be much appreciated by the
shoot 'em up fans, like us.
Besides the one or two fire buttons, the TGS is fit inside a high quality and durable aluminum case, that differentiates it from the Pac-Man's and Tomahawk's plastic cases. To be more specific and give a more detailed picture, here are the casing dimensions of these three controllers (in mm), without the suction cups, fire button, autofire button and the main lever: 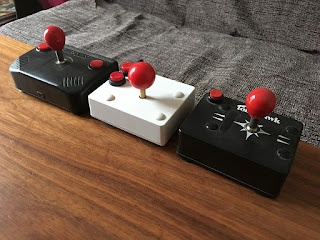 Due to its somewhat smaller dimensions, greater weight (it's a metal case remember?) and its construction materials, the TGS gives the impression of being more solid than the Pac-man and the Tomahawk respectively, which is like a ...miracle indeed! The point is that thanks to the way it's built and the choice of expensive and durable materials, this brand-new Greek arcade joystick is made to last for dozens of years, just like the joysticks created by Nikos Anerousis 30+ years ago. 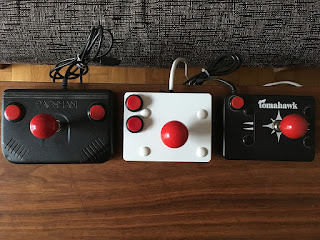 And a top view

At this point we have to make it clear that the 2nd fire button, unlike what happened with the
Pac-man, does not do the same job as the first button and it is actually a 2nd fire button. This means that it can be used in games that support a second fire button, i.e. for throwing grenades, jumping, etc. Especially for the  Amiga computers, the games made for dual button joysticks are not rare at all. Playing some sessions with the classic Hybris and Battle Squadron shooters, confirmed the actual thing of the above claims... 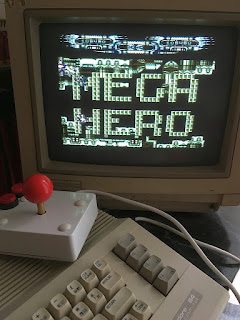 Tested on C64 with success

For the time being, we will not write more about TGS. But We will do so in the (near) future, when a more detailed presentation is available in the next, 24th Retro Planet magazine issue that will be released in June. Do not forget that we tested the beta TGS version, which means that some of its features might change until its official release and we do not have the final packaging which, as we were told, it will be very "unique".
So you can understand that some things are still -lets say- "fluid".
Until then, keep in touch with VCS for more. 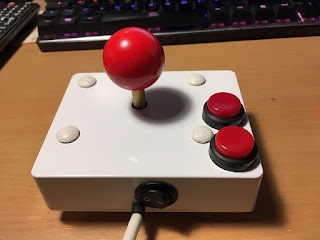 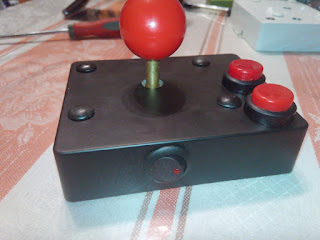 TGS will be available in 2 colors
Posted by VintageComputersSociety at 21:13